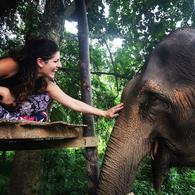 In addition to her theatre exploits Christina has been privileged to perform at events across the country opening for the likes of Martina McBride, Tony Danza and Franc D'Ambrosio. She is also a philanthropist donating her time and talents for several organizations including the National Italian American Foundation, the Muscular Dystrophy Association (whom she helped raise over one million dollars) and Anne Arundel Medical Center, becoming the face of genetic testing for the BRAC1 mutation. Christina also regularly performs with the USO Show Troupe performing for our nations troops and their families globally.

Raised on a small island in the middle of the Chesapeake Bay of Maryland, Christina Carlucci moved to the Big Apple to study at NYU's Tisch School of the Arts. At NYU she specialized in Musical Theatre (CAP21) and in Film/TV (Stonestreet Studios) while receiving a minor in early childhood development and psychology.

eating caprese salads, pole dancing and spending time with her boyfriend Ben. Thank you for visiting!